Beyond The Law – Book Review

This is one hell of a good book by fellow blogger, Tom Benson, whose own blog, http://www.tombensoncreative.wordpress.com, features high in my list of ‘follows.’

Tom is a prolific writer of short stories, flash fiction, novels, and a number of poetry books. In addition to being a great writer and author, he also takes the time to offer advice and support to fellow writers and bloggers.

As well as reading this excellent novel, take a look at his blog, as there are some equally excellent short and flash fiction stories to enjoy too… 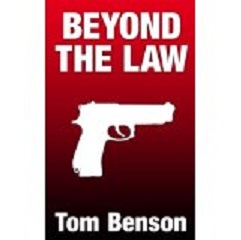 Beyond The Law, by Tom Benson

A ‘can’t put down’ book that definitely hits the ground running. In an explosive opening chapter reminiscent of Andy McNab, we’re introduced to the central character, Phil McKenzie, and some of the background to his special skills and training. What follows is an equally explosive story of unofficial state-sanctioned vigilantism as he and his cohorts set about tackling the tough and violent criminal under-belly of a crime ridden Glasgow. But this is no simple story of good guys hunting down the bad; set against the murky backdrop of the military and British intelligence, Phil McKenzie and a select team of operatives are up against a criminal alliance that spans not only that of organised crime but also high ranking politicians and police officers. The book takes a number of different and dangerous turns, culminating in one hell of a conclusion.

Some of the characters have definite echoes of Lee Child’s Jack Reacher. The dialogue throughout is both fluid and natural, as is the writing and realistic portrayal of a world and characters that thankfully, most never get to see outside the pages of a book. The author’s attention to detail and plot-line are approached with the same deadly precision as that of a covert military operation.

This is a book that effortlessly combines the genres of military adventure with that of crime and justice, and one that would sit well in the company of Lee Child, Andy McNab, and Tom Clancy. Should Tom Benson ever decide to write a sequel, it will certainly leapfrog to the front of my ‘to read’ list. Highly recommended…

For further information on Tom Benson and his past and current writing projects see also: