← Book Trilogy Review – Beyond The Law
Book Review – Alone: and other short stories →

It is with great pleasure I present my review of Salby Evolution, the second book in the Salby Eco/Zombie thriller series/trilogy. In addition to this latest review, I’ve also included my review of the first book in the series towards the end of this post for those readers intrigued enough to want to read book 1 first (highly recommended, you won’t be disappointed!). First though, a little about the author himself  … 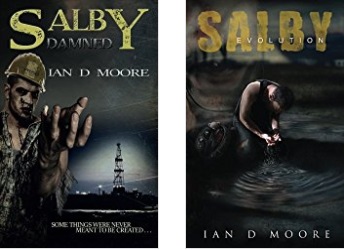 Ian D Moore, as well as being a fellow author, blogger, and book

reviewer is also an Admin and one of the founding members of the IASD Indie Author Support and Discussion group and website:

As well as this, his second novel in the Salby Eco/Zombie thriller series, Ian D.

Moore was also the instrumental force in bringing together a multitude of Indie Authors from around the world when back in 2015 he put the call out for submissions for his highly acclaimed anthology ‘You’re Not Alone’ in aid of the Macmillan cancer charity, in which I feel honoured to have had one of my own short stories included, and  to again be contributing a story for the 2018 edition in aid of Macmillan.

Click Here for Amazon link to You’re Not Alone

Prior to embarking on his writing career, Ian D Moore previously served as a soldier and engineer in the British army, worked as a self-employed truck driver, and still works in commercial and domestic transport in addition to running a small online writing services business.

Ian D Moore is a UK based author and family man, and someone I greatly admire and respect both as a writer and as a person.

A multitude of story-lines that gradually converge to a thrilling conclusion – great sequel!

Although intertwined with the first book of this ongoing series, Salby Evolution reads extremely well as a stand-alone instalment, though in all honesty, personally, I would still highly recommend reading Salby Damned first to enjoy this one to the full. 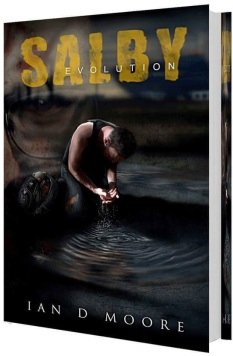 In book one the story was very much a localised one, concentrating on how the authorities would deal with a combined ecological stroke biological ‘accident.’ In this second instalment, the story naturally expands to the international repercussions of what could easily have escalated into the sort of zombie apocalypse only previously imagined in wild speculation.

The action switches from the UK to Russia, where characters who were central to dealing with the first Salby virus outbreak have been drafted in to help deal with a possible new outbreak.

This new chapter starts with two main storylines, one which quite seamlessly follows on from just a few months after the first book finishes, but with sufficient references to the past to bring new readers up to speed while providing a subtle recap for those who read book 1 first. As the story progresses, the original characters diverge to cover different aspects of the story i.e. determining if the virus has spread, has it changed, tracking down possible new carriers of it, as well as dealing with other parties equally interested in the Salby virus. Secondly, we have what I would regard as the main thrust of the story, an offshoot from the original outbreak but threatening a future one, initially running parallel to the original Salby virus outbreak of the first book but gradually catching up and converging with other threads of the ongoing story here.

I did think a little way into the book that perhaps the author had been slightly over-ambitious in the scope of the sequel with everything that was going on, the switching of perspectives and slightly different timelines but he skillfully drew all the different elements into a complex but extremely well-constructed story.

I was impressed by the way the author handled the varying stories and sub-plots, some featuring several characters from the first book and written from a third person point of view, consistent with the writing style of that book. In another, the reader is introduced to a couple of new characters but from the first-person perspective of leading man Simon, a stark contrast to Nathan, the leading man, and hero of the first book; Simon in comparison is a bit of an anti-hero, older, not the same sort of macho character and having many more flaws and personal demons of his own to contend with but still proving his worth nonetheless.

The switching back and forth between these different threads worked surprisingly well, especially the way in which the different timelines and stories converged in their relevance to the overall picture.

I was pleased that this sequel also paid homage to book 1 in that we were treated to a few more encounters with victims of the virus i.e. the ‘Deadheads’ – they served as a timely reminder of the surreal and terrifying consequences of the Salby outbreak – but the author didn’t try to rehash them for any sort of dramatic effect but instead took the story forward, and in new directions; what started as a surprisingly intelligent and believable zombie outbreak in book 1 (but with a small ‘z’ I’d say),  has moved slightly away from that concept and evolved instead into an equally intelligent but more complex thriller, again throwing together some of the same elements – cutting-edge bio-engineering, viral infection, and a military interest in the virus, but this time adding manevolent scientists, political ambition, and the threat of world threatening consequences – and like any good thriller, some nice twists along the way (particularly relating to Simon but some other good ones too).

Not only does this sequel expand upon the first instalment, the quality of writing itself has evolved and improved too – I gave the first book in this series a five-star rating but with the proviso that I thought it fell just short of that at maybe a 4.7 to 4.8 on account of a slight over-emphasis on military terminology that might slightly confuse a non-military reader. In this book though I think the author has got the balance exactly right.

A first-rate book both in its own right and as a sequel, and indeed as a prequel to some as yet unknown conclusion, a very easy and solid five stars for me!

For those of you sufficiently intrigued, my review of Book 1 in this superb series …

A chillingly realistic and believable scenario… Enjoyed it!

Although a fan of the film and televised Zombie efforts this is the first time I’ve actually read anything in the genre, having previously been skeptical as to whether it would transfer well to the written word.

Whilst I’ve always had to totally suspend disbelief in order to enjoy the Zombie genre in the past, with Salby Damned I was presented with a chillingly realistic and believable scenario that had me hooked right from the start. This isn’t the story of a world-wide fantastical epidemic but a more likely and localised disaster borne out of the merging of two highly topical issues, namely biological warfare and the more recent and controversial gas shale fracking. 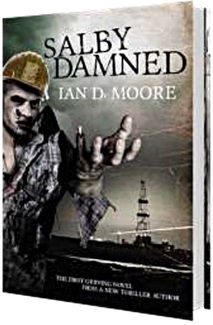 The book cover put me in mind of the TV series The Walking Dead, but whereas that concentrated on the individual survival of a specific and isolated group of people, Salby Damned, although it largely concentrates on a few individuals, it also deals with how the authorities tackle the problem of a zombie-like plague, and how inevitably the military would play a large part in that. The author pays great attention to military detail, creating a very real and authentic feel to how a military base would house and protect survivors; I don’t just mean in terms of military accuracy, I would expect that from the author given his background, but by the way in which he conveys his expertise to the written word. As anyone who has even a rudimentary knowledge of the British military will know, it is filled with innumerable acronyms that can be very confusing to civilians, but the author explains and accounts for them very simply in the narrative without resorting to all sorts of contrived dialogue. My only concern here is that there might have been a tad too much emphasis on the military detail for those with no knowledge or real interest in that side of things, but for me personally, it worked very well. Speaking of the military, it was refreshing that the central hero as it were was a just a regular ex-soldier rather than ex-special forces as it made him more believable as a character – far too often, unless being ex-special forces is central to the story, such characters are made to appear almost super-human in their abilities, whereas here, Nathan’s vulnerability and frailties are just as evident as his strengths.

If I had to categorise this book, I’d say it was more a thriller than Science fiction or horror, though there are indeed elements of the latter. The story itself unsurprisingly concerns an apparent accident that results in a zombie-like plague, and then, Nathan an ex-soldier and a beautiful doctor, and the part they play in the search for a cure. Amid the subplots, we have courage and heroism, political and industrial intrigue, a touch of romance, and action wise, plenty of deadly encounters with the undead victims of the plague. In fact, some of the subplots were a real bonus to this story and definitely added to the overall enjoyment rather than simply being there to flesh out the page numbers. What was also refreshing about this book though is that unlike the film and TV ventures, it didn’t rely at all on sensational blood and gore for its impact.

If I had but one small criticism to make, apart from the ‘possible’ over-emphasis of the military and weaponry detail, it would be the lack of any anger and resentment towards those responsible for creating the circumstances in which the plague occurred, but apart from that the story was clever and well written, with a good balance of superficial though very credible science to add authenticity to the wider story. I was also extremely impressed with the way the author concluded the story, i.e. in not leaving lots of annoying loose ends that demand a sequel just for its own sake, but nonetheless surprising the reader with a few unexpected twists that leave the door open to one. If I had to give an exact rating for this debut novel I would say 4.7 to 4.8, but since I don’t I can quite happily give it a five. Would I read a sequel? Absolutely yes! 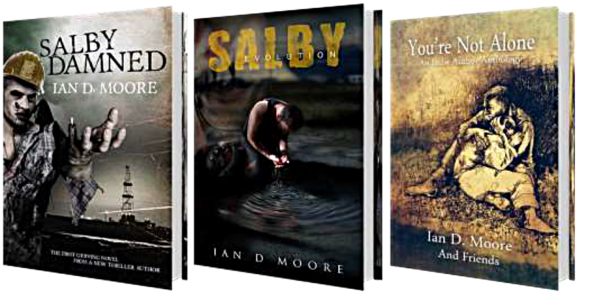 ← Book Trilogy Review – Beyond The Law
Book Review – Alone: and other short stories →