Author Michael Domino found his voice first as a writer of poetry. He composed two collections titled Cadillac on The Bowery and Wandering Mind.  From there he moved on to the art of the short story after realizing that many of his poems and prose were in fact stories in the miniature.  He is now working on his first Novel. Further information and links to the author’s works can be found at:

& at his WordPress blog:

(Available from Amazon in both eBook & print formats) 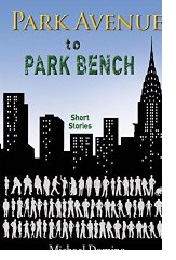 We’ve all seen pictures and film representations of New York but here we have a collection of short stories that really portray the everyday life of its inhabitants and the character of the city, from the splendid sky scrapers to the dingy motels, of high flying business men to the street side bums. What impressed me most was the author’s ability to truly put me in the shoes of the characters, as though I too were walking those same streets and avenues of that great city. The language and terminology all had a distinct New York feel – even if you’ve never actually visited New York, you really feel as though you’re there; Michael Domino takes the reader into the heart of his world, telling tales that are a splendid mix of both the past and present, and of the changing face of the city as its many old buildings and enterprises slowly give way to the new.

Whilst there is a real and uplifting ‘feel good’ factor enshrined within the streets and character of New York throughout the book, every facet of the city and its varied inhabitants are explored here; a billionaire business man whose gone from rags to riches, hence the title of the book, second and third generation Italian/American pizza restaurant owners adding to the rich character of the city, the stereotypical private investigator meeting up with a client in a pizza place, ex-convicts living by their wits, a gypsy fortune teller giving a self-doubting writer a glimpse of the future, and above all, stories of everyday people going out of their way to help their fellow New Yorkers; any perception of New Yorkers as being too busy or too focused on their own lives to allow time for their neighbours are emphatically dispelled here.

The writing and descriptive elements were without doubt absolutely brilliant, and the dialogue was as rich and varied as the stories and people themselves. What was also interesting was that not one of the stories relied on any sort of twist in the tale or contrived ending to give them meaning, relying instead on the story as a whole to provide the reader’s enjoyment. I did feel a couple of the later stories in this collection veered away slightly from the character and feel of most of the early and midway ones, but not to the detriment of the collection, showing as they did a slightly different perspective. There’s no doubt that much of the author’s own life and experience has gone into these stories, as he clearly states in the introduction, giving each story a genuine authenticity. One of the best short story collections I’ve read in years, and as a committed fan of the genre, that’s quite something. Looking forward to reading more from this author…

Michaels Domino’s other works: click on thumbnails for details